Beranda » Learning English » Liverpool » Salam Olahraga » Sepakbola » Why I Choose to be a Liverpudlian!

Why I Choose to be a Liverpudlian!

Hello, my amazing audience! My name is Azhar Ilyas and I was born and live in Banda Aceh, a beautiful place that was popular by tsunami disaster and the process of rehabilitation and reconstruction. It was a beautiful and wonderful place.

I want to tell you about my favourite football club, Liverpool. A name was given to a super fantastic football. Liverpool, I was know the name when I was child. I played FIFA ’96 and I was search many player to fulfill may create team. I was remember a little bit player, like Steve McManaman, Ian Rush and Bruce Gobbelaar, because Manchester United was more popular than them.

When FIFA ’99 was launched, I was know more player from Liverpool because they have many popular player like Robbie Fowler, Michael Owen and Dietmar Hamann. I just watch them from news sport and weekly sport highlight from TPI since 2001 when the private TV broadcast has broadcasting on Banda Aceh.


The national TV was broadcasting it, and I know that English Premier League have more enthusiastic fans than Serie A supporter. When I watched for Michael Owen and his team, there are many Liverpudlian have screamed and give standing ovation or applause to support to them. That was amazing for me.

I have watched Serie A League between 1995 – 2000 and I have found the difference between Serie A and Premier League that Serie A have focused on tehnically and English Premier League have focused to their style that named “kick and run”. I have support Juventus since 1995 – 1998 and Lazio since 1998.

In Serie A, there are many stars have played like Zidane, Maldini, Cannavaro, Thuram, Nesta, Del Piero and Inzaghi. Then, Veron, Totti, Batistuta, Cafu, Peruzzi. You can mention many name from Serie A, but since a “Calciopoli Gate”, many stars have moved to another League. Beside that, Serie A was bored by the few team dominance and it was annoyed for fans to know the scandal.

Since Calciopoli Gate, many star player have preferred other league like Spanish League and English Premier League Especially for Premier League, their Football Association have organized very well their competition management. They have coordinated many things: improving stadium so that many people can bring their family to spend their holiday on watching a match, improve the ticket sales and dividing of broadcasting TV right for the clubs, increase promotion and selecting just stars player from abroad that must be give licensed to play in their league.

Why must be Liverpudlian? I was fall in love on Liverpool and Anfield Stadium. I enjoyed the fact that Liverpool always have “flamboyant” style of football. Almost every season that I watched, they give a name on top scorer competition. Robbie Fowler, Michael Owen, Steven Gerrard, Luis Suarez and Daniel Sturridge.

Even this season is not their best performance for many reason, Liverpool is still playing beautiful football and now they also improve their defending way. I believe many Liverpool player have give their heart to play their Football just like Steven Gerrard, the best captain. Liverpool have many history, like the tragedy of Hillsborough that was commemorated every years.

Liverpool also have a same spirit to sharing, it was represented by their tagline: “You Never Walk Alone”. In Indonesia, we have many supporters of the club. Traditionally, Liverpool have a merseyside derby vs Everton and the English derby vs Manchester United.
Now, Liverpool have a new era. Maybe in the past I just support a powerful club, with the experienced manager and player. Give example Juventus with Marcelo Lippi, United with Alex Ferguson, Lazio with Eriksson and Barcelona with Guardiola. But when I was support Brendan Rodgers and his team, it was feel not different. I think Rodgers have good football knowledge and with any reason they have big potential to win the league in the future.

In this information and technology era, it was happyful fact that many people can connected by it. Also for Liverpudlian that have connected by twitter, facebook etc. I want to say for many Liverpudlian, always give the same scream to your Reds warrior. I also give many thanks to Garuda Indonesia to be a sponsorship for this club.

I always enjoy the show from Coutinho, Can, Sterling, Martin, Henderson and all Liverpool football player’s. Just enjoy your football guys. And the score will come. And we will scream and celebrate it together … 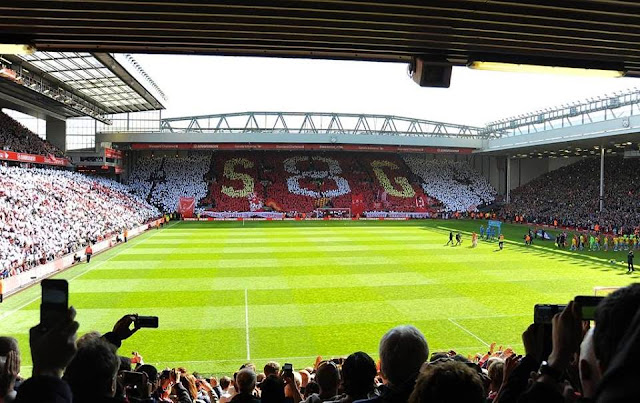 This article have published on my other blog: https://azharbanda.wordpress.com/2015/05/07/why-must-be-a-liverpudlian

Belum ada tanggapan untuk "Why I Choose to be a Liverpudlian!"